Mr. Yudhistir Debata, Co-Founder after completing his education in Mathematics was posted as a Physics faculty in DPS Vidyapeeth in 1991. From 1995, he worked as Mathematics Lecturer in the Charampa Degree College, Bhadrak for 7 years. He was then selected as the Academic Coordinator in one of the leading schools of India - Dhirubhai Ambani School, Gujarat in 2003. After putting in 8 years of service he joined as the Vice- Principal in Presidency School, a unit of the premier Presidency Group of Schools, Bangalore/Mangalore and served there from 2009 to 2012 March. A hardcore academician, Mr. Debata could not resist his temptation to class room teaching and wanted to bring a revolution in the class room practices. To put his ideas into practice and give wings to his academic innovations, he thought of an institution entirely different from the stereotype public schools. Thus came SBD International School to materialise his dream of excellence in Education.

Greetings from the SBDIS family ! 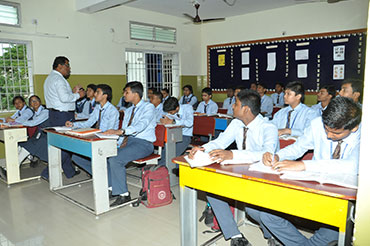 It is my proud privilege to introduce you all to this wonderful family. SBD International School, Bhadrak is an all encompassing co-educational school which offers both rich and conducive environment for the holistic development of the child. We at SBD International school, believe that "Education is the mother of leadership". It is the most important aspect in today's competitive world and we as educators ensure that we provide our children with an education that will prepare them to face the society in the future. No education can be complete without equipping children with knowledge of the happenings in the world. The curriculum is designed to cater to the needs of the children and prepare them for being leaders of tomorrow. With a dedicated staff and an enriching curriculum, we seek the cooperation of the parent community in facilitating complete development of the child. I am confident that the coming years will see more bridges over the gulf that separates us as individuals and a child under the aegis of SBDIS, will be trained, and groomed to cross many a milestone and achieve excellence in all fields.